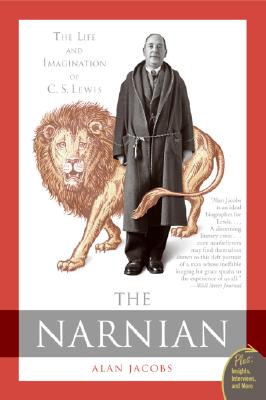 The Narnian: The Life and Imagination of C. S. Lewis

One wonders if it can be helped. Release a movie adaptation of a book and watch the publisher's profits soar. Books by the author, not to mention books about the author, crowd the shelves ad nauseum, each demanding their share of the consumer's attention. Make that author C.S. Lewis-one of the most written-about authors of the last century-and one must seriously consider how best to spend one's reading hours. Thankfully, Alan Jacobs understands his predicament. As one who once vowed never to write another word about Lewis, he approaches the task with a fearlessness born of humility. Jacobs' Narnian is biography, no doubt, but he's unmistakable in his focus: it is Lewis' imaginative man that fuels not only all manner of his writing but also his life and his faith. On every page, Jacobs' story is bent on illustrating how Lewis's imagination shaped his philosophy, his theology, and his fiction-and how, in turn, these disciplines informed Lewis' delight in virtue and moralism. In Jacobs' words, 'It is the merger of the moral and the imaginative-this vision of virtue itself as adorable, even ravishing-that makes Lewis so distinctive.' It follows that Jacobs' work carries that same distinction. With erudition and very little sentimentality, he reveals the genius of an imagination without betraying the life that animated it, observing that 'few writers other than Lewis could open to us that sphere of experience in which John Milton and Beatrix Potter can be seen as laborers in the same vineyard.'

The White Witch, Aslan, fauns and talking beasts, centaurs and epic battles between good and evil -- all these have become a part of our collective imagination through the classic volumes of The Chronicles of Narnia. Over the past half century, children everywhere have escaped into this world and delighted in its wonders and enchantments. Yet what we do know of the man who created Narnia? This biography sheds new light on the making of the original Narnian, C. S. Lewis himself.

Lewis was one of the intellectual giants of the twentieth century and arguably the most influential religious writer of his day. An Oxford don and scholar of medieval literature, he loved to debate philosophy at his local pub, and his wartime broadcasts on the basics of Christian belief made him a celebrity in his native Britain. Yet one of the most intriguing aspects of Clive Staples Lewis remains a mystery. How did this middle-aged Irish bachelor turn to the writing of stories for children -- stories that would become among the most popular and beloved ever written?

Alan Jacobs masterfully tells the story of the original Narnian. From Lewis's childhood days in Ireland playing with his brother, Warnie, to his horrific experiences in the trenches during World War I, to his friendship with J. R. R. Tolkien (and other members of the "Inklings"), and his remarkable late-life marriage to Joy Davidman, Jacobs traces the events and people that shaped Lewis's philosophy, theology, and fiction. The result is much more than a conventional biography of Lewis: Jacobs tells the story of a profound and extraordinary imagination. For those who grew up with Narnia, or for those just discovering it, The Narnian tells a remarkable tale of a man who knew great loss and great delight, but who knew above all that the world holds far more richness and meaning than the average eye can see.

Title:: The Narnian: The Life and Imagination of C. S. Lewis

The Narnian: The Life and Imagination of C. S. Lewis