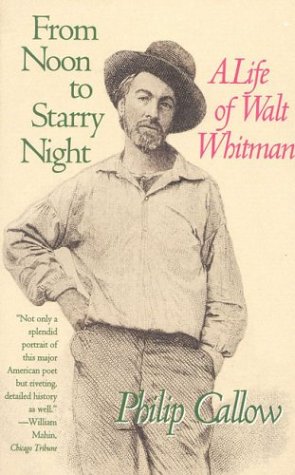 From Noon to Starry Night : A Life of Walt Whitman

In From Noon to Starry Night, published on the 100th anniversary of Walt Whitman's death, the great poet of democracy has at last found his biographer. Philip Callow brings to Whitman's extraordinary life the skills and sensitivities of novelist, poet, and biographer. Here is the life of America's poet--beguiling, surprising, in some ways magical--a wonderfully detailed portrait, lyrically told. More successfully than any earlier biography, Callow's has captured Whitman's elusive truth. Drawing upon a broad range of sources, and quoting liberally from Whitman's poems, Callow has re-created the poet's life in all its roundness and intricate corners, "smiling evasively in his thicket of identities." Tradesman, teacher, buccaneer journalist, suddenly a poet; a man who loved crowds yet was fundamentally a solitary, with a sexual fluidity that remains a riddle to this day, Whitman was, Callow observes, a democrat who set out to imagine the life of the average man in average circumstances changed into something grand and heroic. "The sheer certainty of his voice can still astonish us, '' the author writes. He has brought Whitman alive again in this perceptive and evocative biography. With 8 pages of photographs.

Title:: From Noon to Starry Night : A Life of Walt Whitman

From Noon to Starry Night : A Life of Walt Whitman