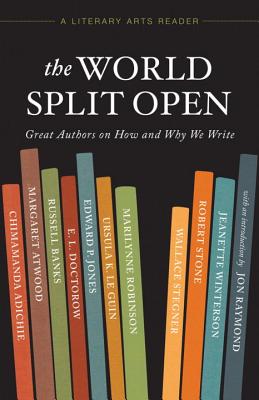 The World Split Open: Great Writers on How and Why We Write (A Literary Arts Reader)

Since 1984, Literary Arts has welcomed many of the world's most renowned authors and storytellers to its stage for one of the country's largest lectures series. Sold-out crowds congregate at Portland's Arlene Schnitzer Concert Hall to hear these writers' discuss their work and their thoughts on the trajectory of contemporary literature and culture. In celebration of Literary Arts' thirty-year anniversary, Tin House Books has collected highlights from the series in a single volume. Whether it's Wallace Stegner exploring how we use fiction to make sense of life or Ursula K. Le Guin on where ideas come from, Margaret Atwood on the need for complex female characters or Robert Stone on morality and truth in literature, Edward P. Jones on the role of imagination in historical novels or Marilynne Robinson on the nature of beauty, these essays illuminate not just the world of letters but the world at large.

Title:: The World Split Open: Great Writers on How and Why We Write (A Literary Arts Reader)

The World Split Open: Great Writers on How and Why We Write (A Literary Arts Reader)