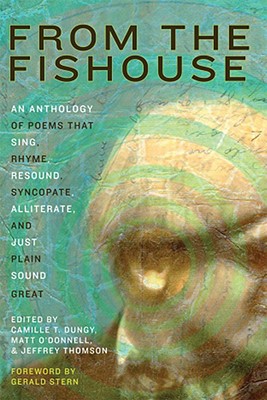 From the Fishouse (fishousepoems.org) is a leading on-line audio archive of contemporary poetry that focuses on emerging poets who pay particular attention to the sounds and rhythms of their work. This winning anthology of 175+ poems from the site is a festival of verse at its acoustic best.The book is divided into ten playful sections. Each one, named for a poem within it, underscores the Fishouse modus operandi of showcasing poetry's aural and rhythmic possibilities. For example, "In the Romantic Longhand of the Night" contains poems that work in or around traditional forms, while "The Barrel Is Surely Coming Down the Hill" is comprised of poems that gain momentum as they move. These sections lend a structure to the book that is at once easygoing and enlightening.In addition, the anthology contains these exciting features: a foreword by Gerald Stern, which delves into how poetry's aural traditions are producing such cutting-edge new work; lively excerpts from the site's Q&A's with the poets; and a cross-referenced index of the poems' technical and stylistic traits.Contributors to the anthology include many of the best new writers in America, among them Adrian Blevins, Gabrielle Calvocoressi, Tina Chang, Paul Guest, Matthea Harvey, James Hoch, Major Jackson, Ilya Kaminsky, Dana Levin, Cate Marvin, Patrick Rosal, Tracy K. Smith, and Brian Turner. Along with dozens of others, these poets make the From the Fishouse anthology a who's who of today's most dynamic versifiers.

Title:: From the Fishouse: An Anthology of Poems that Sing, Rhyme, Resound, Syncopate, Alliterate, and Just Plain Sound Great