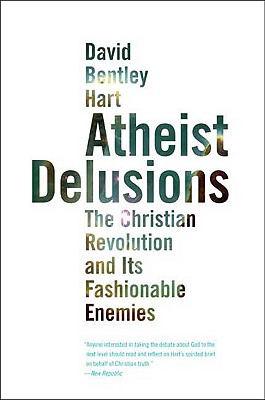 Atheist Delusions: The Christian Revolution and Its Fashionable Enemies

The recent bestselling broadsides of the 'new atheists'-e.g. Richard Dawkins, Sam Harris, Daniel Dennett, Christopher Hitchens, even literary figures like Philip Pullman and Dan Brown-cause our author to long for Old Atheists (or if not atheist, certainly anti-Christian cousins), such as Celsus, Diderot, Voltaire, Hume, Gibbon, and Nietzsche, all of whom Hart evokes as at least intellectually respectable. So Hart only spends a chapter or two dismissing the arguments of Dawkins and Co. His attentions are much more drawn to that which is expressed in the subtitle of this magnificent book: the Christian Revolution. Along the way, he historically deconstructs the material evidence of what might be called the Enlightenment consensus about the evils of Christianity: intolerance, suppression of scientific progress, championing of ignorance. The Christian revolution with which Hart is fascinated concerns the radical and unprecedented nature of the Church's insistence on the infinite value of each human person in the context of the ancient world. Here, where women, slaves, and the common laborer counted as nothing, came a proclamation and a practice-especially in the Church's worship, care for the poor, and theology-- that effectively annihilated distinctions of class, gender, and ethnicity. When all due qualifications are made for early Christianity's lapses-Hart is bracingly honest here-its rise, triumph, and transformation of the Roman world must be considered without parallel in the history of the West. Hart can pack more erudite content into sometimes perfect sentences than almost any writer we know, and his chapter, 'The Face of the Faceless,' is simply a masterpiece, tempting us to predict an immortal brilliance within its setting comparable to Dostoevsky's 'Grand Inquisitor' in The Brothers Karamazov.

In this provocative book one of the most brilliant scholars of religion today dismantles distorted religious "histories" offered up by Christopher Hitchens, Richard Dawkins, and other contemporary critics of religion and advocates of atheism. David Bentley Hart provides a bold correction of the New Atheists's misrepresentations of the Christian past, countering their polemics with a brilliant account of Christianity and its message of human charity as the most revolutionary movement in all of Western history.

Hart outlines how Christianity transformed the ancient world in ways we may have forgotten: bringing liberation from fatalism, conferring great dignity on human beings, subverting the cruelest aspects of pagan society, and elevating charity above all virtues. He then argues that what we term the "Age of Reason" was in fact the beginning of the eclipse of reason's authority as a cultural value. Hart closes the book in the present, delineating the ominous consequences of the decline of Christendom in a culture that is built upon its moral and spiritual values.

Title:: Atheist Delusions: The Christian Revolution and Its Fashionable Enemies

Atheist Delusions: The Christian Revolution and Its Fashionable Enemies