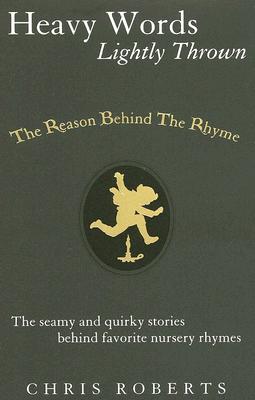 Heavy Words Lightly Thrown: The Reason Behind the Rhyme

Was Little Jack Horner a squatter? ?Baa Baa Black Sheep? a bleat about taxation? What did Jack and Jill "really" do on that hill? Chris Roberts reveals the seamy and quirky stories behind our favorite nursery rhymes.

Nursery rhymes are rarely as innocent as they seem?there is a wealth of concealed meaning in our familiar childhood verse. More than a century after Queen Victoria decided that children were better off without the full story, London librarian Chris Roberts brings the truth to light. He traces the origins of the subtle phrases and antiquated references, revealing religious hatred, political subversion, and sexual innuendo.

Roberts reveals that when Jack, nimble and quick, jumped over a candlestick, he was reenacting a popular sport that tested whether a person was lean and healthy. Humpty Dumpty was actually a cannon mounted on the walls of a church in Colchester, blown up during the English Civil War. Few know that the cockles in ?Mary, Mary, Quite Contrary? actually refer to cuckolds in the promiscuous court of Mary Queen of Scots. Or that ?Rub-a-dub-dub, three maids in a tub? was inspired by a fairground peepshow.

A fascinating history lesson that makes astonishing connections to contemporary popular culture, "Heavy Words Lightly Thrown" is for Anglophiles, parents, history buffs, and anyone who has ever wondered about the origins of rhymes. The book features a glossary of slang and historical terms, and spooky silhouettes of nursery-rhyme characters to accompany the rhymes. Mother Goose will never look the same again.
Praise:
?Boisterous and fascinating.?
--"Daily Telegraph"
?Robert's entertainingly mischievous readings of these traditional songs grab symbolic readings from any available sources and stir them in a big pot.?
--Steven Poole, "The Guardian"
?Roberts is a lucid and funny writer ? his ability to provide a historical overview as he focuses on bygone detail makes fascinating reading?
--"Sainsbury's Magazine"
?Very meticulous with his research and doesn?t try to fool you with waffle or overstatement. Fun and easily digestible wander through history. Though don?t be surprised if by the end, much like Jack after he?d broken his ? crown?, you feel like you?ve lost your innocence.?
--"Leeds Guide"
?An irreverent romp through the received wisdom of the nursery rhymes with which we all think we are so familiar.?
--"Sunday Herald"
?Entertaining expos? of the surprising stories behind well-known nursery rhymes revealing a seething subtext of sexual innuendo, religious hatred and political subversion.?
--"Bookseller"

Title:: Heavy Words Lightly Thrown: The Reason Behind the Rhyme

Heavy Words Lightly Thrown: The Reason Behind the Rhyme