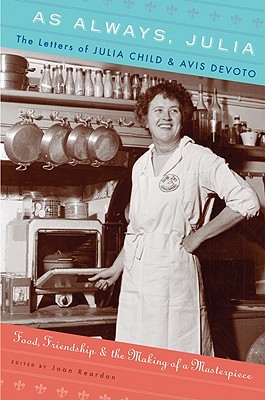 As Always, Julia: The Letters of Julia Child and Avis DeVoto

With her outsize personality, Julia Child is known around the world by her first name alone. But despite that familiarity, how much do we really know of the inner Julia? Now more than 200 letters exchanged between Julia and Avis DeVoto, her friend and unofficial literary agent memorably introduced in the hit movie Julie & Julia, open the window on Julia's deepest thoughts and feelings. This riveting correspondence, in print for the first time, chronicles the blossoming of a unique and lifelong friendship between the two women and the turbulent process of Julia's creation of Mastering the Art of French Cooking, one of the most influential cookbooks ever written. Frank, bawdy, funny, exuberant, and occasionally agonized, these letters show Julia, first as a new bride in Paris, then becoming increasingly worldly and adventuresome as she follows her diplomat husband in his postings to Nice, Germany, and Norway. With commentary by the noted food historian Joan Reardon, and covering topics as diverse as the lack of good wine in the United States, McCarthyism, and sexual mores, these astonishing letters show America on the verge of political, social, and gastronomic transformation.

Title:: As Always, Julia: The Letters of Julia Child and Avis DeVoto

As Always, Julia: The Letters of Julia Child and Avis DeVoto