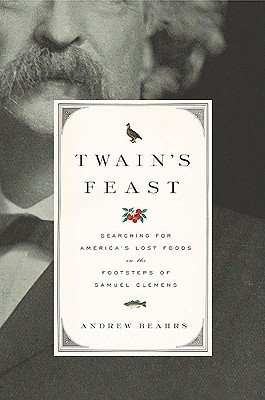 Twain's Feast: Searching for America's Lost Foods in the Footsteps of Samuel Clemens

One young food writer's search for America's lost wild foods, from New Orleans croakers to Illinois Prairie hen, with Mark Twain as his guide.
In the winter of 1879, Mark Twain paused during a tour of Europe to compose a fantasy menu of the American dishes he missed the most. He was desperately sick of European hotel cooking, and his menu, made up of some eighty regional specialties, was a true love letter to American food: "Lake Trout, from Tahoe. Hot biscuits, Southern style. Canvasback-duck, from Baltimore. Black-bass, from the Mississippi."
When food writer Andrew Beahrs first read Twain's menu in the classic work "A Tramp Abroad," he noticed the dishes were regional in the truest sense of the word-drawn fresh from grasslands, woods, and waters in a time before railroads had dissolved the culinary lines between Hannibal, Missouri, and San Francisco. These dishes were all local, all wild, and all, Beahrs feared, had been lost in the shift to industrialized food.
In "Twain's Feast," Beahrs sets out to discover whether eight of these forgotten regional specialties can still be found on American tables, tracing Twain's footsteps as he goes. Twain's menu, it turns out, was also a memoir and a map. The dishes he yearned for were all connected to cherished moments in his life-from the New Orleans croakers he loved as a young man on the Mississippi to the maple syrup he savored in Connecticut, with his family, during his final, lonely years.
Tracking Twain's foods leads Beahrs from the dwindling prairie of rural Illinois to a six-hundred-pound coon supper in Arkansas to the biggest native oyster reef in San Francisco Bay. He finds pockets of the country where Twain's favorite foods still exist or where intrepid farmers, fishermen, and conservationists are trying to bring them back. In "Twain's Feast," he reminds us what we've lost as these wild foods have disappeared from our tables, and what we stand to gain from their return.
Weaving together passages from Twain's famous works and Beahrs's own adventures, "Twain's Feast" takes us on a journey into America's past, to a time when foods taken fresh from grasslands, woods, and waters were at the heart of American cooking.

Twain's Feast: Searching for America's Lost Foods in the Footsteps of Samuel Clemens