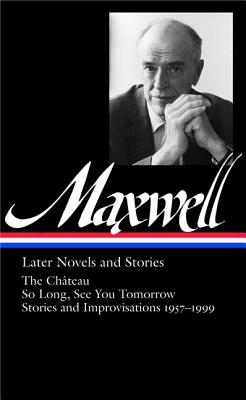 William Maxwell: Later Novels and Stories: The ChÃ¢teau / So Long, See You Tomorrow (Library of America #184)

On the centennial of William Maxwell's birth, here is the second volume in a two- volume collected edition that reveals the full range of an extraordinary literary voice, a voice that John Updike has called "one of the wisest in American fiction . . . as well as one of the kindest." In Later Novels and Stories, Maxwell deepens his connection to his signature subject matter even as he broadens his canvas. The Ch teau (1961) describes the most subtle and bittersweet encounter of American naivet and Old World mystery since Henry James. So Long, See You Tomorrow, Billie Dyer (1992) and eleven other works of short fiction, some never before collected. The volume concludes with forty brief "improvisations"--fairy tales Maxwell wrote for his wife--and the essay "Nearing Ninety" (1997), his moving valediction to a lifetime of reading and storytelling.

LIBRARY OF AMERICA is an independent nonprofit cultural organization founded in 1979 to preserve our nation's literary heritage by publishing, and keeping permanently in print, America's best and most significant writing. The Library of America series includes more than 300 volumes to date, authoritative editions that average 1,000 pages in length, feature cloth covers, sewn bindings, and ribbon markers, and are printed on premium acid-free paper that will last for centuries.

William Maxwell: Later Novels and Stories: The ChÃ¢teau / So Long, See You Tomorrow (Library of America #184)