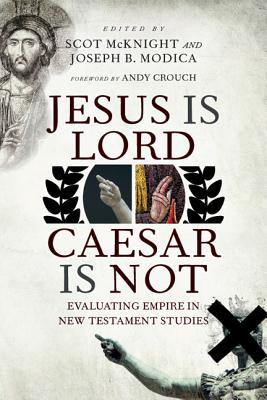 Jesus Is Lord, Caesar Is Not: Evaluating Empire in New Testament Studies

The New Testament is immersed in the often hostile world of the Roman Empire, but its relationship to that world is complex. What is meant by Jesus' call to "render unto Caesar" his due, when Luke subversively heralds the arrival of a Savior and Lord who is not Caesar, but Christ? Is there tension between Peter's command to "honor the emperor" and John's apocalyptic denouncement of Rome as "Babylon the Great, the mother of harlots"? Under the direction of editors Scot McKnight and Joseph B. Modica, respected biblical scholars have come together to investigate an increasingly popular approach in New Testament scholarship of interpreting the text through the lens of empire. The contributors praise recent insights into the New Testament's expose of Roman statecraft, ideology and emperor worship. But they conclude that rhetoric of anti-imperialism is often given too much sway. More than simply hearing the biblical authors in their context, it tends to govern what they must be saying about their context. The result of this collaboration, Jesus Is Lord, Caesar Is Not, is a groundbreaking yet accessible critical evaluation of empire criticism. Contributors include: David Nystrom on Roman ideology Judith A. Diehl on the state of empire scholarship Joel Willitts on Matthew Dean Pinter on Luke Christopher W. Skinner on John's Gospel and Letters Drew Strait on Acts Michael F. Bird on Romans Lynn Cohick on Philippians Allan R. Bevere on Colossians and Philemon Dwight Sheets on Revelation "

Title:: Jesus Is Lord, Caesar Is Not: Evaluating Empire in New Testament Studies

Jesus Is Lord, Caesar Is Not: Evaluating Empire in New Testament Studies