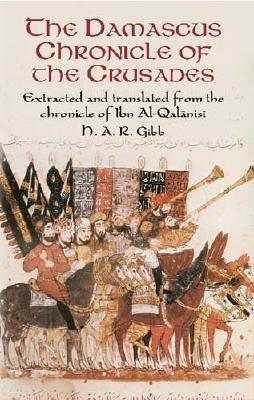 A Saracen stronghold throughout the long history of the Crusades, Damascus served as the capital city for Nur al-Deen, Saladin, and other medieval Muslim leaders. From this prime vantage point comes a remarkable contemporary account of the early Crusades, written by one of the city's leading citizens. Ibn Al-Qalānisī, a distinguished scholar of literature, theology, and law, was twice elected mayor of Damascus. His Chronicle begins in 1097, in the early years of the First Crusade, and concludes in 1159, the year before his death at the age of 90.
An informative introduction sets the scene just prior to invasion by the Crusaders. The colorful narrative relates the particulars of life during wartime; in addition to his accounts of battles, blockades, and diplomatic negotiations, Ibn Al-Qalānisī paints vivid and decidedly biased portraits of the personalities on both sides of this holy war, from gallant commanders and intrepid troops of his native land to their opposition, the "infidels" and: accursed ones."
The author based his work on both written documentation and oral reports, the latter sometimes transcribed from the lips of actual participants. Intended primarily as a textbook for students, this translation by H. A. R. Gibb renders the Arabic text as literally as possible, with minimal annotation, and constitutes an indispensable resource for anyone who needs a firsthand account of the early Crusades.