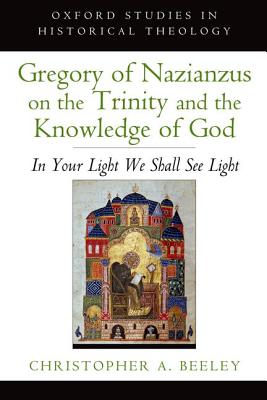 Gregory of Nazianzus on the Trinity and the Knowledge of God: In Your Light We Shall See Light (Oxford Studies in Historical Theology)

By: Christopher A. Beeley

Gregory of Nazianzus (329-390 CE), "the Theologian," is the premier teacher on the Holy Trinity in Eastern Christian tradition, yet for over a century historians and theologians have largely neglected his work.

Christopher Beeley's groundbreaking study -- the first comprehensive treatment in modern scholarship -- examines Gregory's doctrine of the Trinity within the full range of his theological and practical vision. Following an overview of Gregory's life and major works, Beeley traces the central soteriological meaning of Gregory's doctrine in the spiritual dialectic of purification and illumination; the dynamic process of divinization (theosis); the singular identity of Jesus Christ as the eternal Son of God; the divinity and essential presence of the Holy Spirit; and the interpretation of Scripture "according to the Spirit." The book culminates in Gregory's understanding of the Trinity as a whole -- which is "theology" in the fullest sense -- rooted in the monarchy of God the Father and uniquely known in the divine economy of salvation. Finally, Beeley identifies the Trinitarian shape of pastoral ministry, on which Gregory is also the foundational teacher for later Christian tradition. Beeley offers new insights in several key areas, reinterpreting the famous Theological Orations and Christological epistles within the full corpus of Gregory's orations, poems, and letters. Gregory stands out as the leading ecclesiastical figure in the Eastern Roman Empire and the most powerful theologian of his age, who produced the definitive expression of Trinitarian orthodoxy from a characteristically Eastern tradition of Origenist theology, independent of the work of Athanasius and in several respects more insightful than his Cappadocian contemporaries. Long eclipsed in modern scholarship, Gregory Nazianzen is now brought into full view as the major witness to the Trinity among the Greek fathers of the Church.

Title:: Gregory of Nazianzus on the Trinity and the Knowledge of God: In Your Light We Shall See Light (Oxford Studies in Historical Theology)

Gregory of Nazianzus on the Trinity and the Knowledge of God: In Your Light We Shall See Light (Oxford Studies in Historical Theology)