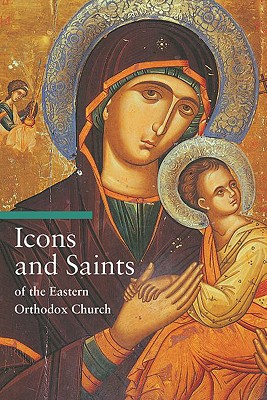 Icons and Saints of the Eastern Orthodox Church

Vital statistics (it's not a coffee table book-it's better; you have to hold it in your hands to understand): a compact 5' x 8' x 1', glossy paperback, gatefold heavy cover, every page bursting with color. We've been waiting years for a book like this. It's simply the best concise introduction we know to the theological vocabulary of Orthodox iconography, with hundreds of full-color plates describing and explaining in simple language all the most well-known saints, feasts and themes of the Church. The layout of each page is usually like this: the full-color icon predominates. A sidebar contains the following succinct information-Text/Title/Feast Day/ (usually scriptural) Sources/Iconography. Other sidebars provide descriptions that point toward specific elements in particular icons, providing explanations for practical questions the icon might provoke. An index of subjects and a helpful glossary conclude the text. Icons have variously been called 'windows in to heaven' 'a visual translation of scripture' or 'the Church's family album.' These phrases suggest but do not capture the full theological significance of holy images. Icons and Saints is unique in that it lets icons speak for themselves, while it merely translates. It's an encyclopedia of imagery. If you have ever asked or been asked, 'Why are icons painted like this?,' 'What do these symbols represent?' or 'Why are icons so important?' then you will appreciate the breadth of information beautifully presented in this book. We highly recommend. 383 pp.

An icon (from the Greek word "eikon," "image") is a wooden panel painting of a holy person or scene from Orthodox Christianity, the religion of the Byzantine Empire that is practiced today mainly in Greece and Russia. It was believed that these works acted as intermediaries between worshipers and the holy personages they depicted. Their pictorial language is stylized and primarily symbolic, rather than literal and narrative. Indeed, every attitude, pose, and color depicted in an icon has a precise meaning, and their painters--usually monks--followed prescribed models from iconographic manuals.
The goal of this book is to catalogue the vast heritage of images according to iconographic type and subject, from the most ancient at the Monastery of Saint Catherine in the Sinai to those from Greece, Constantinople, and Russia. Chapters focus on the role of icons in the Orthodox liturgy and on common iconic subjects, including the fathers and saints of the Eastern Church and the life of Jesus and his followers. As with other volumes in the Guide to Imagery series, this book includes a wealth of color illustrations in which details are called out for discussion.

Title:: Icons and Saints of the Eastern Orthodox Church

Icons and Saints of the Eastern Orthodox Church