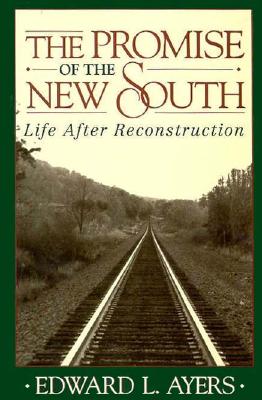 The Promise of the New South: Life After Reconstruction

At a public picnic in the South in the 1890s, a young man paid five cents for his first chance to hear the revolutionary Edison talking machine. He eagerly listened as the soundman placed the needle down, only to find that through the tubes he held to his ears came the chilling sounds of a lynching. In this story, with its blend of new technology and old hatreds, genteel picnic and mob violence, Edward Ayers captures the history of the South in the years between Reconstruction and the turn of the century--a combination of progress and reaction that defined the contradictory promise of the New South.
Ranging from the Georgia coast to the Tennessee mountains, from the power brokers to tenant farmers, Ayers depicts a land of startling contrasts--a time of progress and repression, of new industries and old ways. Ayers takes us from remote Southern towns, revolutionized by the spread of the railroads, to the statehouses where Democratic "Redeemers" swept away the legacy of Reconstruction; from the small farmers, trapped into growing nothing but cotton, to the new industries of Birmingham; from abuse and intimacy in the family to tumultuous public meetings of the prohibitionists. He explores every aspect of society, politics, and the economy, detailing the importance of each in the emerging New South. Here is the local Baptist congregation, the country store, the tobacco-stained second-class railroad car, the rise of Populism: the teeming, nineteenth-century South comes to life in these pages. And central to the entire story is the role of race relations, from alliances and friendships between blacks and whites to the spread of Jim Crow laws and disenfranchisement. Ayers weaves all these details into the contradictory story of the New South, showing how the region developed the patterns it was to follow for the next fifty years.
When Edward Ayers published Vengeance and Justice, a landmark study of crime and punishment in the nineteenth-century South, he received wide acclaim. Now he provides an unforgettable account of the New South--a land with one foot in the future and the other in the past.

Title:: The Promise of the New South: Life After Reconstruction

The Promise of the New South: Life After Reconstruction