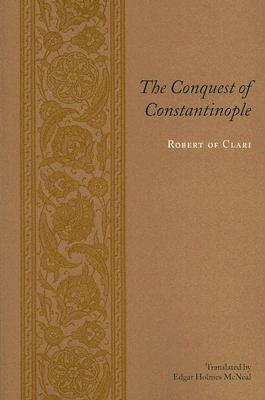 The Fourth Crusade (1202-1204) set out to capture the Holy Land; it ended up sacking Constantinople, an Orthodox Christian city and the capital of the Byzantine Empire. Robert of Clari, an obscure knight from Picardy, provides an extraordinary recounting of the decidedly mixed triumphs of the Fourth Crusade, an event that deepened the rift between the Eastern and Western churches. His chronicle is one of the few accounts of the crusades told from the point of view of an ordinary soldier. He provides firsthand descriptions of battles with the Greek defenders of Constantinople and the various hardships endured on the crusaders' eastward journey. Robert also serves as a guide, describing the marvels of Constantinople and other sights he encountered during the crusade.

Robert's account tells of the practical, political, and theological negotiations and disputes that defined the Fourth Crusade. He recounts the Venetian Doge's stubborn bargaining with the crusaders over the use of his ships and how the pope's bishops vigorously campaigned for the conquest of Constantinople. Throughout the crusade, various kings and lords from Europe jockeyed for power as they tried to assert their political and military leadership. Robert's chronicle concludes with the political disputes between various nobles to control the Byzantine Empire and the spoils of battle.