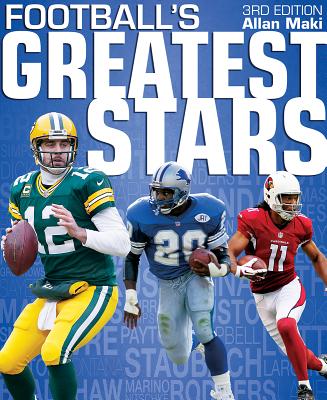 "It's sure to be a hit with any gridiron fan."
--American Profile

"A superb book for fans and a compelling history of a great game."
--BookPage

At the heart of Football's Greatest Stars is author Allan Maki's picks for the 50 greatest and most exciting players in the history of professional football. They're all here: from the pioneers of the game to the current stars to the legends headed to the Hall of Fame. Exciting photographs show these past and present superstars in action, and 32 franchise profiles chart the league's rise to the top of professional sports.

This third edition also features a new chapter on the future greats currently rumbling on the field.

Some of the current NFL stars in this edition are:

Allan Maki also examines the sport in two insightful essays: one on the National Football League's spectacular rise to prominence, and the other on the leading men and defining moments that have shaped the league.

Football's Greatest Stars is a must-read for anyone serious about football.