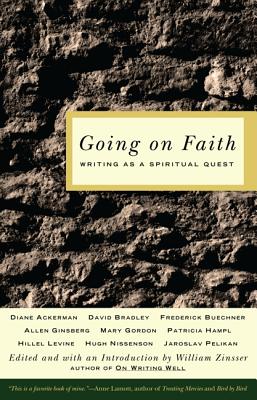 Going on Faith: Writing as a Spiritual Quest

In this deeply felt book, nine American writers and thinkers from different points of the religious compass discuss how their work is nourished by spiritual concerns. Diana Ackerman explains why she calls herself a ""messenger of wonder"" and how, in her observations of the natural world, ""there is a form of beholding that is a kind of prayer."" David Bradley recalls how his inheritance as the son, grandson and great-grandson of black preachers has enabled him, at considerable pain, to be ""touched by the word."" Frederick Buechner makes an intensely personal journey to his roots as a novelist: ""In fiction, as in faith, something outside ourselves is breathed into us if we're open enough to inhale it."" Allen Ginsberg describes how his poetry is grounded in the Buddhist idea of renunciation of ""hand-me-down conceptions"" and the meditative practice of ""letting go of thoughts."" Mary Gordon retraces an odyssey in which the religious beliefs and forms of a Catholic girlhood turned out to be ""as useful as a wiretap"" to the grown-up novelist. Patricia Hampl describes how the writing of Virgin Time took her on a series of pilgrimages to explore the contemplative life. Hillel Levine tells of his search for the mystery of goodness, exemplified by a Japanese diplomat in Lithuania who saved thousands of Jews on the eve of World War II. Hugh Nissenson explains how his work as a Jewish writer has been animated by ""a sense of the holy"" and shaped by the ""poetry, drama and narrative"" of the King James Bible. Jaroslav Pelikan revisits three religious writers--Augustine, Newman, and Boethius--whose influence on other religious writers over the centuries has never gone out of fashion. Together, as William Zinsser notes in his introduction, these writers are on a ""pilgrimage to find the source of their faith as individuals and their strength as artists."" ""This collection is joyous. A spur to discussions of the ephemeral boundaries between things sacred and things aesthetic."" --Chicago Tribune ""This is a favorite book of mine."" --Anne Lamott, author of Traveling Mercies and Bird by Bird William Zinsser is a writer, editor, and teacher. His fifteen books include On Writing Well, now in its sixth edition.

Title:: Going on Faith: Writing as a Spiritual Quest

Going on Faith: Writing as a Spiritual Quest