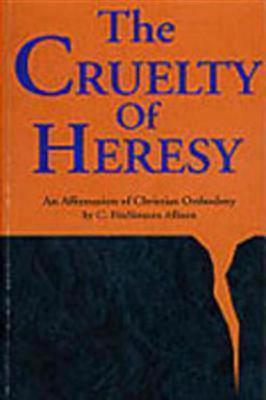 The Cruelty of Heresy: An Affirmation of Christian Orthodoxy

Heresy cruel? In our age of inverted values, Allison contends, the heretic is the heroic freethinker, while the orthodox believer is the powerful authority who squelches freedom. As Allison notes, heresy does not deserve its current good reputation. Heresy is cruel because it panders to sin in the human heart. He looks at the ancient heresies of the Christological, Trinitarian, and Soteriological debates of the early Church, addressed at the first four Ecumenical Councils, and finds them as cruel and divisive today as they were then. Docetism, for example, leaves us ''bereft of... hope and joy.'' Manichaeism brings the delusion that true love is ''always some other, impossible, forbidden love,'' thus contributing to the ''pain, suffering and broken marriages of countless people.'' Allison presents the essential errors of each ancient heresy with accessible scholarship and pastoral concern for their effects today, their ''disastrous consequences for the moral and spiritual life'' (Geoffrey Wainwright). Allison argues that orthodox belief requires a ''rectitude of heart,'' worshipful and willing to die to self, to invite others to what Dorothy Sayers and G.K. Chesterton called the romance of orthodoxy. 197 pp.

Ancient heresies have modern expressions that influence our churches and culture, creating cruel dilemmas for today's Christian in the form of error, sin, and various distortions on orthodox faith. In Cruelty of Heresy, Bishop Allison captures the drama and relevance of the Councils of the fourth and fifth centuries and shows how the remarkable achievements of these early struggles provide valuable guidelines for believers today.

Title:: The Cruelty of Heresy: An Affirmation of Christian Orthodoxy

The Cruelty of Heresy: An Affirmation of Christian Orthodoxy