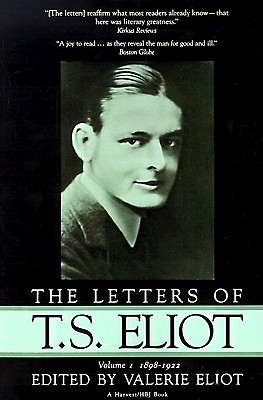 T. S. Eliot, Nobel laureate and a great literary presence of the twentieth century, is renowned for his unique voice as poet, critic, and dramatist. This first volume of his long-awaited correspondence covers the period from his childhood in St. Louis, Missouri, until the end of 1922, by which time he had settled permanently in England, married, and published "The Love Song of J. Alfred Prufrock, " The Sacred Wood, and The Waste Land.

Included her are all the significant extant letters Eliot wrote up to age 24 as well as many letters written to him by his family, friends, and contemporaries. There are insights into his struggle to earn a living, care for a wife who was frequently ill, edit a magazine, and become known as a critic and poet. And through the correspondence emerges a memorable view of the social and intellectual milieu before and after World War I.

Valerie Eliot has written a detailed introduction, provided annotations and commentary, and selected numerous photographs of Eliot and his world, many of which have never been shown publicly. All these elements combine to create an exceptional portrait of Eliot in the early years of his personal and professional development -- the closest approximation readers will ever have to an autobiography of the poet.