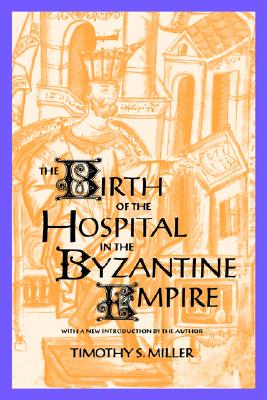 The Birth of the Hospital in the Byzantine Empire

Classified on its back cover by the heading ''History of Medicine,'' The Birth of the Hospital in the Byzantine Empire is an excellent synthesis of the way in which Hellenic culture, city environment, the Christian church, monasticism, Roman law, imperial bureaucracy, and the medical profession participated in the formation and development of Byzantine hospitals. Depending primarily on the Typikon of the Pantokrator Monastery in Constantinople for its substantial description of the monastery-sponsored hospital known as the Pantokrator Xenon, Miller begins his careful unraveling of the complex history of the xenon's daily administrations including its location, professional staff and patient treatment. He then manages a brief history of medicine in the ancient world prior to the fourth century before launching into the theological arguments that arose in the Eastern Church for and against the use of secular medicine in caring for the sick. The Greek Fathers, with Basil of Caesarea at their helm, stressed the goodness of God's creation and its potential (in the hands of skilled physicians) to ''provide the proper additive to restore the imbalance of disease to the equilibrium of health.'' Ironically, the first hospital was born in a century that saw the most ferocious persecution of Christians, the installation of a Christian Emperor and the subsequent closing of all pagan temples. Miller follows the hospital's birth through the bureaucracy of its adolescent years, its dynamic presence amidst flourishing monastic communities and its eventual decline following the Fourth Crusade. 288 pp.

Medical historians have traditionally claimed that modern hospitals emerged during the latter half of the nineteenth century. Premodern hospitals, according to many scholars, existed mainly as refuges for the desperately poor and sick, providing patients with little or no medical care. Challenging this view in a compelling survey of hospitals in the East Roman Empire, Timothy Miller traces the birth and development of Byzantine xenones, or hospitals, from their emergence in the fourth century to their decline in the fifteenth century, just prior to the Turkish conquest of Constantinople. These sophisticated medical facilities, he concludes, are the true ancestors of modern hospitals. In a new introduction to this paperback edition, Miller describes the growing scholarship on this subject in recent years.

Title:: The Birth of the Hospital in the Byzantine Empire

The Birth of the Hospital in the Byzantine Empire