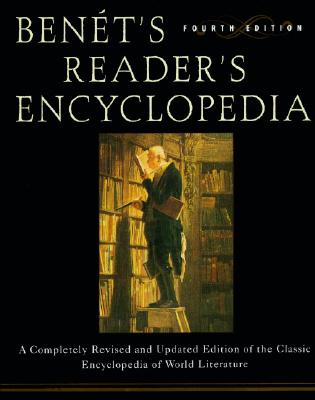 What is a reader's encyclopedia? Most fundamentally, it's a book about BOOKS--and that means from the Bible and the Epic of Gilgamesh down to ONE HUNDRED YEARS OF SOLITUDE. It's about authors, playwrights and poets, letter-writers and essayists. It include entries on literary movemets, figures from mythology and history as they impinge on literature, and on technical terms that defie sub-categories of it. There are entries o characters in novels and characters who might as well be in novels. We know people who read it every day, like a devotional. If you love to read, you'll want this book; it will give you pleasure and make you smarter. Clean boards, solid & unmkarked; old sticker on jacket.

Long recognized as the outstanding reference on world literature, Benet's Reader's Encyclopedia is the one against which all others are measured, and is the single-most complete one-volume encyclopedia available for those with a serious interest in the subject.

The entries explore all aspects of literature from around the world: biographies of poets and playwrights, novelists and belle trists; plot synopses and character sketches from important works; historical data on literary schools, movements, terms and awards; myths and legends; and more.

For nearly 50 years, this unique single-volume encyclopedia of world literature has been hailed as the best available. Here are over 10,000 informative entries, covering everything a reader could wish to know:

For nearly 50 years, William Rose Benet and the editors who succeeded him have upheld the level of quality that distinguished the original Benet's Reader's Encyclopedia. Like its predecessors, this new edition will teach and delight, illuminate and expound, and enrich the pleasure of reading in countless ways.