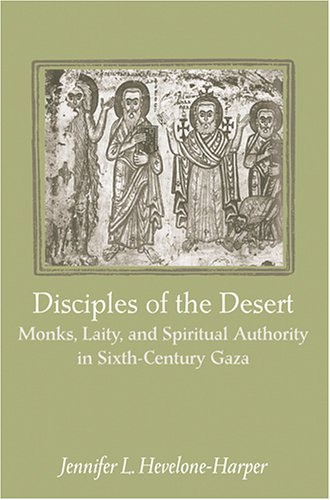 Disciples of the Desert: Monks, Laity, and Spiritual Authority in Sixth-Century Gaza

On the periphery of the Roman empire, the sixth-century desert city of Gaza served as a crossroads between Palestine and Egypt. The nearby village of Tawatha was home to the thriving monastery of Abbot Seridos and the renowned anchorites Barsanuphius, known to the people as the Great Old Man, and his disciple John. The laity of the area looked to the monks for spiritual leadership, as did their brother monks, bishops, and religious leaders from as far away as Jerusalem and Constantinople. Having adopted a life of physical isolation, the monks communicated with others by letters, offering guidance in such matters as treatment of slaves, distribution of alms, interpretation of visions, and social relations with pagans and Jews.

This extraordinary correspondence opens a window into the spiritual world of the desert monastery and the lay community it served. In Disciples of the Desert, Jennifer Hevelone-Harper uses a careful study of the letters to reveal fascinating insights into the monastic community and sixth-century Christian spirituality.

Hevelone-Harper explains the network of spiritual authority that was created to lead the monastic community and discusses how monastic leaders responded to challenges to authority, appointed successors, and chose and mentored disciples. She reveals the immense love that Abbot Seridos, Barsanuphius, and John had for their fellow monastics and for the lay community in Tawatha, Gaza, and beyond.

Title:: Disciples of the Desert: Monks, Laity, and Spiritual Authority in Sixth-Century Gaza

Disciples of the Desert: Monks, Laity, and Spiritual Authority in Sixth-Century Gaza