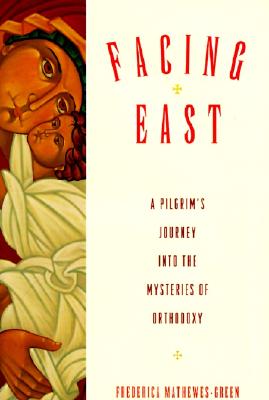 Facing East : A Pilgrims Journey into the Mysteries of Orthodoxy

As new - unmarked copy, inside corners on jacket flap creased.

"He was an Episcopal priest, but he was standing in an Orthodox church on this Saturday night and thinking about the Truth. At the altar a gold-robed priest strode back and forth swinging incense, ...a small choir was singing in haunting harmony, voices twining in a capella simplicity...the ancient words of this vesperal service had been chanted for more than a millennium. Lex orandi, lex orandi; what people pray shapes what they believe....

"She was his wife, and she was standing next to him thinking about her feet. They hurt"Frederica Mathewes-Green became an unexpected companion on her husband's pilgrimage into a faith that is as novel to us in the West as it is ancient in the East. Like many Americans seeking a deeper faith, Mathewes-Green and her family found in Eastern Orthodoxy a faith both demanding and offering more in true devotion and spirituality. In this luminous, affectionate, and deeply personal account of her pilgrimage, Mathewes-Green reveals a church strongly rooted in the teachings of its early fathers and a tradition of principle and great beauty that has endured throughout the centuries.Following the framework of the Orthodox calendar -- from Lent to Pascha to Nativity, from Vespers to feasts to fasts -- Mathewes-Green chronicles a year in the life of her small Orthodox mission church. Discovering the splendor and solemnity of Orthodox ritual, exploring the daunting majesty of Orthodox services and customs, and sharing their daily anxieties, disappointments, and delights, the Mathewes-Green family and the members of the Holy Cross Mission Church reveal both the intricacies of Orthodox belief and the deep joy they have found in their new faith. At once entertaining, hilarious, and reverent, Facing East is an unforgettable portrait of the human vitality and divine essence of Eastern Orthodoxy.

Title:: Facing East : A Pilgrims Journey into the Mysteries of Orthodoxy

Facing East : A Pilgrims Journey into the Mysteries of Orthodoxy