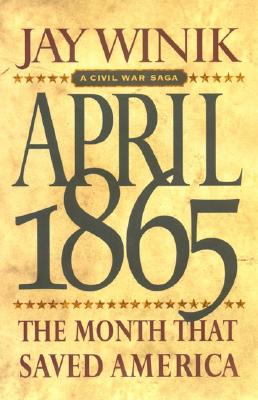 April 1865: The Month That Saved America

April 1865 was a month that could have unraveled the nation. Instead, it saved it. Here Jay Winik offers a brilliant new look at the Civil War's final days that will forever change the way we see the war's end and the nation's new beginning. Uniquely set within the larger sweep of history, filled with rich profiles of outsize figures, fresh iconoclastic scholarship, and a gripping narrative, this is a masterful account of the thirty most pivotal days in the life of the United States.

It was not inevitable that the Civil War would end as it did, or that it would end at all well. Indeed, it almost didn't. Time and again, critical moments could have plunged the nation back into war or fashioned a far harsher, more violent, and volatile peace. Now, in a superbly told story, Winik captures the epic images and extraordinary history as never before. This one month witnessed the frenzied fall of Richmond; a daring last-ditch Southern plan for guerrilla warfare; Lee's harrowing retreat; and then Appomattox. It saw Lincoln's assassination just five days later, and a near-successful plot to decapitate the Union government, followed by chaos and coup fears in the North, collapsed negotiations and continued bloodshed in the South, and finally, the start of national reconciliation. In the end, April 1865 emerges as not just the tale of the war's denouement, but the story of the making of our nation.

Provocative, bold, exquisitely rendered, and stunningly original, April 1865 is the first major reassessment of the Civil War's close and is destined to become one of the great stories of American history.

April 1865: The Month That Saved America