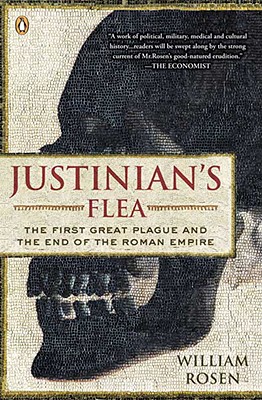 Justinian's Flea: The First Great Plague and the End of the Roman Empire

From the acclaimed author of Miracle Cure and The Third Horseman, the epic story of the collision between one of nature's smallest organisms and history's mightiest empire

During the golden age of the Roman Empire, Emperor Justinian reigned over a territory that stretched from Italy to North Africa. It was the zenith of his achievements and the last of them. In 542 AD, the bubonic plague struck. In weeks, the glorious classical world of Justinian had been plunged into the medieval and modern Europe was born. At its height, five thousand people died every day in Constantinople. Cities were completely depopulated. It was the first pandemic the world had ever known and it left its indelible mark: when the plague finally ended, more than 25 million people were dead. Weaving together history, microbiology, ecology, jurisprudence, theology, and epidemiology, Justinian's Flea is a unique and sweeping account of the little known event that changed the course of a continent.

Title:: Justinian's Flea: The First Great Plague and the End of the Roman Empire

Justinian's Flea: The First Great Plague and the End of the Roman Empire