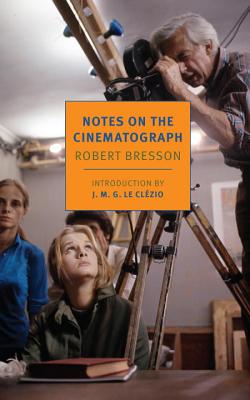 The French film director Robert Bresson was one of the great artists of the twentieth century and among the most radical, original, and radiant stylists of any time. He worked with nonprofessional actors--models, as he called them--and deployed a starkly limited but hypnotic array of sounds and images to produce such classic works as A Man Escaped, Pickpocket, Diary of a Country Priest, and Lancelot of the Lake. From the beginning to the end of his career, Bresson dedicated himself to making movies in which nothing is superfluous and everything is always at stake.

Notes on the Cinematograph distills the essence of Bresson's theory and practice as a filmmaker and artist. He discusses the fundamental differences between theater and film; parses the deep grammar of silence, music, and noise; and affirms the mysterious power of the image to unlock the human soul. This book, indispensable for admirers of this great director and for -students of the cinema, will also prove an inspiration, much like Rilke's Letters to a Young Poet, for anyone who responds to the claims of the imagination at its most searching and rigorous.