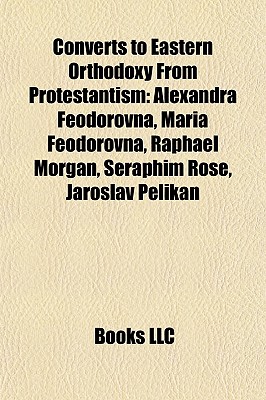 Please note that the content of this book primarily consists of articles available from Wikipedia or other free sources online. Pages: 29. Chapters: Alexandra Feodorovna, Queen Anne-Marie of Greece, Raphael Morgan, Princess Elisabeth of Hesse and by Rhine, Seraphim Rose, Julia Dent Cantacuzene Spiransky-Grant, Jaroslav Pelikan, Richard Swinburne, Rod Dreher, Duchess Jutta of Mecklenburg-Strelitz, Dmitri, Peter E. Gillquist, Duane Pederson, Michael S. Hyatt. Excerpt: Alix of Hesse and by Rhine later Alexandra Feodorovna Romanova (Russian: ) (6 June 1872 - 17 July 1918), was Empress consort of Russia as spouse of Nicholas II, the last Emperor of the Russian Empire. Born a granddaughter of Queen Victoria of the United Kingdom, she was given the name Alexandra Feodorovna upon being received into the Russian Orthodox Church, which canonized her as Saint Alexandra the Passion Bearer in 2000. Alexandra is best remembered as the last Tsarina of Russia, as one of the most famous royal carriers of the haemophilia disease and for her support of autocratic control over the country. Her notorious friendship with the Russian mystic Grigori Rasputin was also an important factor in her life. Princess Alix of Hesse with her grandmother Queen Victoria and her four older siblings in mourning after the deaths of her mother and sister.Alexandra was born on 6 June 1872 at the New Palace in Darmstadt as Princess Alix Viktoria Helena Luise Beatrice of Hesse and by Rhine, a Grand Duchy that was then part of the German Empire. She was the sixth child among the seven children of Grand Duke Louis IV of Hesse and by Rhine, and Princess Alice of the United Kingdom, the second daughter of Queen Victoria and Albert, the Prince Consort. Alix was baptized on 1 July 1872 according to the rites of the Lutheran Church and given the names of her mother and each of her mother's four sisters, some of which were transliterated into German. Her godparents were the Prince of Wales, the Princess of Wales, ...